‘Tribute In Light’, A Memorial Art Installation In Remembrance Of The September 11 Attacks

The ‘Tribute in Light’ is an art installation of 88 searchlights placed next to the site of the World Trade Center to create two vertical columns of light in remembrance of the September 11 attacks. It is produced annually by The Municipal Art Society of New York, a non-profit membership organization that fights for intelligent urban planning, design and preservation through education, dialogue and advocacy in New York. 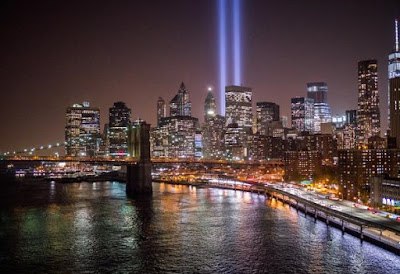 The ‘Tribute in Light’ initially ran as a temporary installation from March 11 to April 14, 2002, and was launched again in 2003 to mark the second anniversary of the attack. As of 2010, it has been repeated every year on September 11. On July 23, 2012, plans were initiated for the National September 11 Memorial & Museum to assume the lease for the MTA (Manhattan Transit Authority) property used during this tribute, and to begin transitioning operation of the tribute from the Municipal Art Society to the memorial foundation. 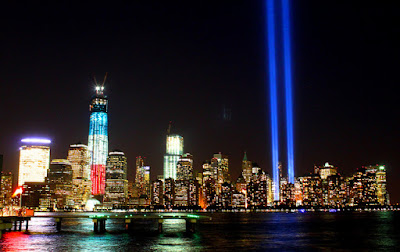 Those working on the project came up with the concept in the week following the attack. On September 13 2001, the idea was presented to executives of Consolidated Edison, the electric utility company serving New York City. Architects John Bennett and Gustavo Bonevardi of PROUN Space Studio distributed their “Project for the Immediate Reconstruction of Manhattan’s Skyline”. Artists Julian LaVerdiere and Paul Myoda, who before September 11 were working on the 91st floor of the World Trade Center north tower on a proposed light sculpture on the giant radio antenna conceived of a project called “Phantom Towers”. 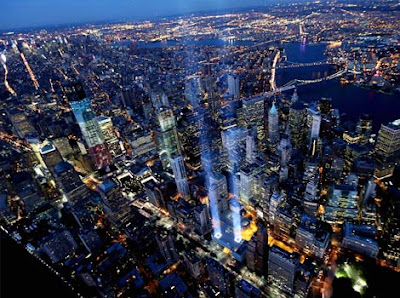 They were commissioned by The New York Times Magazine to create an image of the project for its September 23 cover. In collaboration, the concept was presented to the Municipal Art Society and on September 19, 2001 the Municipal Art Society chairman wrote to Mayor Rudy Giuliani asking him “to consider placing two large searchlights near the disaster site, projecting their light straight up into the sky.” 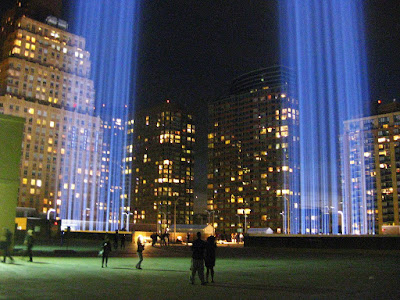 After some consideration it was decided to contact lighting experts in the field of high intensity light displays. A Las Vegas company was chosen to help design the installation and to supply the 88 fixtures that would be needed.
Posted by Miami Art Scene at 6:04 AM