Bonanno is an internationally recognized artist who taps into the daily emotional and social challenges of living with autism, placing his innermost feelings onto canvas. The work is image and concept driven and imbedded in his personal philosophy. His art contains the essence of his life, feelings, thoughts and dreams, coupled around objects or topics that “get stuck in his head”, including traffic lights, grids, ceiling fans, graffiti and pop culture.

His work is collected by art world luminaries such as Joey Arias, Robert Galinsky, Supermodel Monica Watkins, and the owner of Azucar Ice Cream Company in Miami, Suzy Batlle, to name a few.

Bonanno began his artist representation with veteran NYC Art Dealer and co-owner of New York City based Umbrella Arts Gallery, Margaret Bodell. Bodell helped define and expand the outsider movement during the 90’s in her East Village gallery by including artists with autism alongside contemporary artists, bringing to light the unique visual arts gift that only the autistic can tap into such as Michael Madore, Jessica Park and Ricky Hagedorn. 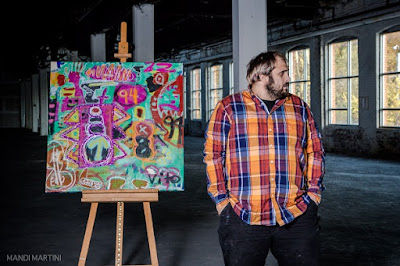 Bodell encouraged Bonanno to collaborate with “mainstream” artist’s one-on-one-in order to help him round out his artistic voice and philosophy, as well as to encourage him to continue to explore additional artistic mediums. These collaborations have resulted in a discovery of the wide range of artistic styles that Bonanno is capable of and have furthered his independent and unedited artistic voice. Bodell believes Bonanno has a rare form of extreme talent.